The Donation Button Some People Asked For

It's apparently time to blow the layer of proverbial dust off this blog. I'm going on a bike tour! ...In the Winter! The plans have been made. The time off work has been granted (yes, for the first time I'm actually going on a bike tour AND keeping my job). In a week from now, I'm getting a ride to San Diego to bike the Southern Tier ACA route. And I won't be going solo this time either. My coworker Joel is going to be making the trip with me.

This will be Joel's first long distance bike tour. So there's some expectation that I will be the one with experience. But the fact of the matter is that this trip will be a first for me in a lot of ways too. It will be my first tour in the Winter. It will be my first time touring with someone else. It will be my first time biking in the desert. And as a perhaps more personal than practical change, yet first all the same, it will be my first time doing a bike tour where I'm not relocating, not quitting my job, not giving up home to find another. It's going to be a new and different adventure. And I'm looking forward to it. As much as I've tried to damp it down, I've been restless ever since I was unable to do my traditional tour this Spring. I am in need of an escape from the day to day.

I find it funny my new touring companion has expressed concerns about keeping up with me. I'm concerned if I'll be able to keep up with him. He's ten years younger than I am. It makes me feel old. It also reminds me I am not as young as I was, or as I felt, when I did my first bike tour, closing in on five years ago. For all the far better gear I have now than I did then, for all the miles of touring, for all the time spent working at bike shops, I don't feel much more competent now than I was then. But rather, I have a lot more confidence in my incompetence. If anything, I think that is the best life lesson bike touring has given me. I sat tonight at a reunion of my high school peers who have largely gone on to be far more successful people than I have, having that thought run through my head. I have few marketable skills, and I don't know how to do much, but I have learned to be confident in my ability  to bungle my way through all the same. Nine times out of ten it works. And the other tenth of the time is from where all the best stories come. 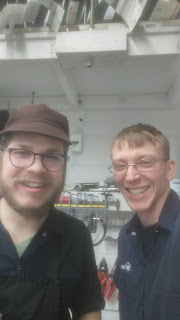